Board member Noreen Rice receives the Morgan 'Sonny' Wayson Memorial Trophy for 2021 from Vice-president Jay Graham. Noreen was designated Recruiter-in-Chief for her extraordinary efforts in increasing membership. The trophy is awarded annually to an individual who has gone the extra mile to improve and promote WRW and croquet. 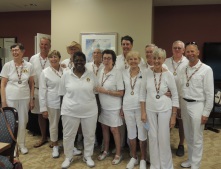 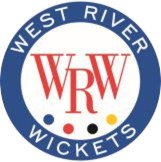